On August 2, 1814, after the fierce Battle of Lundy’s Lane, American troops were entrenched around Fort Erie, Canada, just across the Niagara River. British Lt. Gen. Drummond was eager to cut off their supplies arriving from Buffalo and Black Rock. He ordered Lt. Col. Tucker to take 600 men, cross the Niagara, and destroy “the enemy’s depot of provisions and stores at Buffalo” and “capture the guns and dispersion or capture of his troops at Black Rock.” If supplies were cut off, the Americans would “not only be reduced to the necessity of fighting under desperate circumstances or surrendering unconditionally, but it may lead immediately to the re-establishment of our naval ascendancy on Lake Erie.” American Maj. Gen. Brown directed Buffalo be defended at all costs. On August 3, Major Ludowick Morgan, commanding 240 riflemen of the combined 1st and 4th Regiment, ordered the dismantling of part of the bridge at what is now known as Scajaquada Creek, then called Conjockety Creek, near this spot. The British tried to cross. Despite the Americans being vastly outnumbered, “the signal from Major Morgan’s whistle produced a discharge, deliberate and unerring from every rifle. The British column, as far as it had advanced to the height of the ground or beyond it toward the creek, was literally decapitated, not a man in view left standing.” More British attacks were mounted while British soldiers tried to repair the bridge while under fire, and undertook to build a temporary bridge. All were repelled. A flanking maneuver was attempted, and prevented, and the British retreated to Canada. This was the riflemen’s finest hour. What is now known as the Battle of Scajaquada Creek Bridge was the most successful fight which an American force ever waged within the corporate limits of our present city, and the last hostile movement of the British toward Buffalo. The victory’s military implications were immense, and it has been described as a decisive engagement of the War of 1812 and a clear strategic triumph for the United States. Morgan humbly reported to Maj. Gen. Brown, “If, sir, you believe we have done our duty we shall feel highly gratified.” He became known as the Hero of Conjockety, who “so gallantly repulsed the enemy.” Ten days later, he would perish instantaneously when he was shot while warning a fellow officer of enemy sniper fire during the resulting siege at Fort Erie. Within a month the brave combined 1st and 4th Rifles had lost 16 killed and 39 wounded, nearly 20% of their strength. Major Morgan was buried in Buffalo. He is memorialized with a monument at Forest Lawn Cemetery. He and his troops will forever be a part of this area’s distinguished history and be held in remembrance by a grateful city. 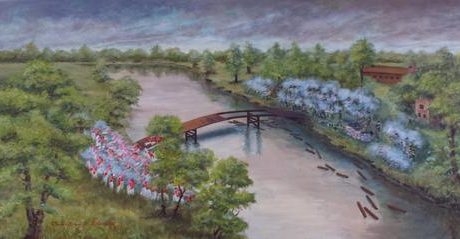