Black Rock Under Siege: A Call to Arms

The first event commemorating the bicentennial of the War of 1812 was held on Squaw Island just northwest of the International Bridge.

The merry men of the Black Rock Militia built a huge bonfire of wood pallets. They included: Mark Kubiniec and Jeremy Schraufstter Black Rock Under Siege; A Call to Arms…! of Joe’s Service Center, Rob Neimiec of Neimiec Builders Supply, Greg Nikiel of Look At That Home Improvement, Dwane Hall, Tavern Master at the Sportsmen’s Tavern, Uri Hryshehyn of the Ukarian American Civic Center and Greg Rohall, Inn Keeper of the soon to open Rohall’s Corner.
What really impacted the bonfire was the wooden replica of the Village of Black Rock that topped it. This was a brilliant idea by Rob Niemiec as it visually infused meaning into the historical significance of the burning of Buffalo and Black Rock in December of 1813.

It was a dramatic scene, one that will linger in the minds of the ninety people who gathered to witness the event.

Black Rock bonfire for the War of 1812
The bonfire was held in sync with the Canadian side at Fort Erie Park led by John Sek that began with the firing of a cannon. On this side, lit torches were given to Sam Hoyt, Dave Rivera, Commander Joe Golombek and newly elected State Assemblyman Mark Grisanti. When the signal was given they simultaneously lit the bonfire.

Preceding the lighting, chairperson of the Historic Preservation Committee Warren Glover talked about the burning of the villages of Black Rock and Buffalo and what it must have been like for those living during this horrific time. A moment of silence followed for those who lost their lives.

​ As the flames grew higher, the crowd circling the bonfire sang the national anthem as American and War of 1812 flags waved calmly in the quiet of the evening. The unexpected appearance of two British scoundrals in uniform added relevance to the event. With them was an historian who presented a large 1812 map of Buffalo and called off the names of businesses that were lost as Buffalo burned.

After much planning by the Historic Preservation Committee, the event unfolded very smoothly. Special thanks go out to Chief Mark Morganti, of the Buffalo Fire Department and Mayor Byron Brown for their support, and the four firemen who were on premises.

The Historic Preservation plans to stage more cross-border bonfires in succeeding Decembers to 2013. If you would like to volunteer or seek more information on the War of 1812 activities you can contact Warren Glover at (716) 836-2903 or wglover246@yahoo.com. 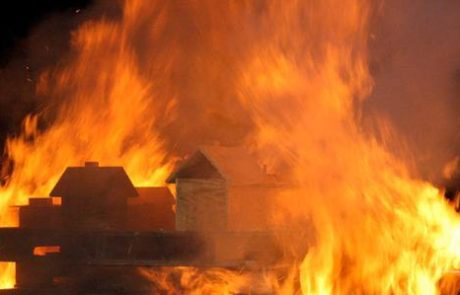