For the past six months the Historic Restoration committee of the Black Rock-Riverside GNPA has been researching and inviting experts to their meetings to discuss the major battles that took place in Black Rock and along Scajaquada Creek during the War of 1812. Plans in the works to commemorate these events, include murals, reenactments, and mapping important positions for signage.

On Saturday morning the committee, guided by Richard Feltoe, an expert and author of a book on the War of 1812, Steve Teeft who is director of the military museum proposed for the Eastern Hills Mall, and Pat Kavanagh, a military researcher, set out on a tour of Black Rock battle sites to decide where markers should be placed.

The group met at Amherst & Niagara where maps were examined and points of conflict, location of batteries, bridge and foundation crossings, barracks locations and curvature of the Scajaquada Creek were discussed. Amherst & Niagara was also the area where the British landed on their way to burn Buffalo in December, 1813.

The group moved to the second location along the north of Scajaquada Creek just west of Grant St. (to the left of TOPS along the bike path). This location marks the site where the Scajaquada Creek Bridge once stood and where the British attacked Buffalo to cut off their supply lines and capture boats at Black Rock. In a major skirmish there in August, 1814, forty-four British casualties were reported and one American.

The next significant site took us farther west to the north end of Squaw Island to the location where the British ship HMS Detroit had been sunk. The Detroit caught the current while under fire and went aground on Squaw Island. Supplies and cannons were lost and only the prisoners were rescued. The ship eventually burned to the hull. Feltoe thought that this would be a good place for a marker and a memorial with cast concrete cannons.

A grassy area with hilly parts south of the parking lot on the south side of the International Railroad Bridge on Squaw Island was met with more excitement, as this would be the perfect location for a battle reenactment for a few reasons. It isn’t developed as a park, is non-urbanized, forms a natural battlefield, and a 3-gun position can be employed.

Feltoe, who also organizes many battle reenactments including those in Fort Erie, explained that the hill overlooking the Niagara River is also high ground where views of Scajaquada Creek, Frenchman’s Creek in Canada, and the spot where the HMS Detroit was sunk can be viewed. Here he suggested a large brass sundial to point out locations and the building of a two-story block house museum, plus bridge and pond in the low grassy area nearby.

The site of Fort Tompkins was the next stop on our journey, located on Niagara Street at the foot of School St., the largest and most important fortification on the American shore in or near Buffalo during the War of 1812. Also occurring here were among the earliest shots fired on the Niagara Frontier and the earliest casualties on this side of the river, according to our guides. They shared many interesting stories about this site’s shore battery engagements, death by ricocheting cannonballs, and enemy actions. A Fort Tompkins marker can be found on the building at 1010 Niagara Street. 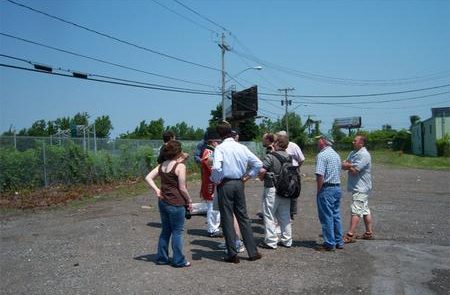